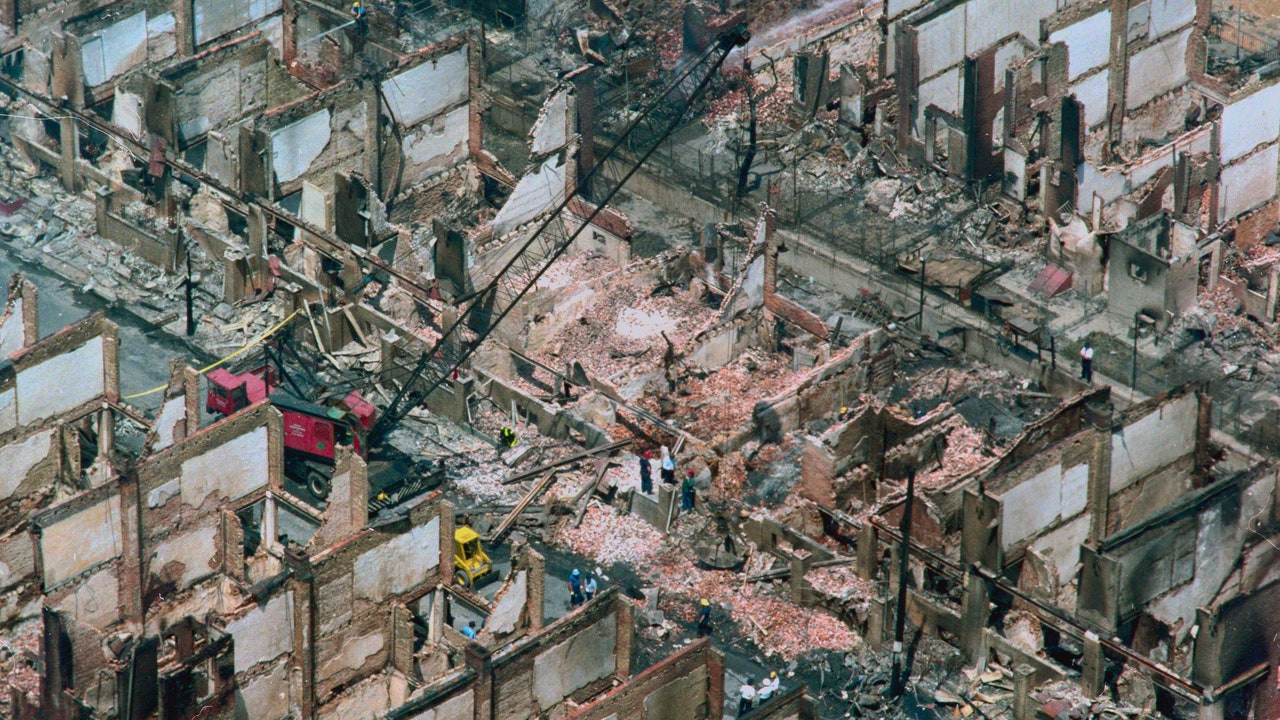 And how Philadelphia became “the city that bombed itself.”

In 1985, an armed standoff between Philadelphia police and members of a radical black liberation group, resulted in the deaths of eleven people. Despite two grand jury investigations and a commission finding that top officials were “grossly negligent”, no police officers or city officials were ever charged for their role in what’s known as the MOVE bombing.

Now, memories of the events serve as a warning about the dangers of the police state, and reminder of the price that black radicals have paid in their fight for liberation.

The era in which MOVE was born was an especially dangerous period for activists and organizers. COINTELPRO, the FBI surveillance program that targeted “political dissident” groups like the Black Panthers, Vietnam War protesters, civil rights leaders, Puerto Rican independence activists, feminists, and socialists, was in effect from 1956 until its exposure in 1971. Its tactics had fatal results, as when Fred Hampton — the deputy chair of the Chicago chapter of the Black Panther Party and also its national spokesman — was killed in 1968 by police as part of a COINTELPRO sting.

The year after the program ceased, MOVE was founded in 1972 by Vincent Leaphart, a Korean War veteran who took the name John Africa to demonstrate his reverence for the continent. The group’s politics were anti-capitalist, anti-government, and anti-modern technology, rooted in a 300-page document called The Guidelines. John Africa preached an anarcho-primitivist gospel of natural living, love for every living being, and advocated for a return to a hunter-gatherer society.

Initially called the Christian Movement for Life, MOVE members considered themselves a family and were involved in animal rights activism and embraced a raw food diet, natural home birth, homeschooling, and composting. They lived communally in a West Philadelphia row home and held public demonstrations against war, racism, and police brutality.

Though their ideologies were initially peaceful, from all accounts, MOVE’s members weren’t exactly ideal neighbors. They often drew the ire of the police with their nonviolent but sometimes raucous protests, and neighbors complained about the family’s compost piles and their habit of blasting profanity-laced political diatribes through loudspeakers at all hours. Following years of targeted police brutality, MOVE became increasingly militant, and according to a 1985 report in The New York Times, may have begun to stockpile weapons.

In 1977, members began to brandish guns in their yard, declaring that they would no longer be beaten or intimidated by law enforcement. The press regularly lambasted their belief system as “an exotic cult” and derided them as “dirty hippies.” But to the city government, MOVE now represented a form of terrorism.

Mayor Frank Rizzo issued an order for their eviction from their home at 311 N. 33rd Street. “These people represent nobody but themselves; they’re complete idiots,” Rizzo told the press. He had previously referredto MOVE as “absolute imbeciles,” “psychotics,” and “not even human beings.”

After a 15-month standoff, police attempted to storm the house and a firefight erupted. An officer was fatally shot in the head. Seven other police officers, five firefighters, three MOVE members, and three bystanders were also injured. The beating of a MOVE member, Delbert Africa, was caught on video, becoming an infamous example of police brutality.

Despite a dispute over who fired the shot that killed the officer — during the trial, MOVE’s lawyer suggested it could have been friendly fire by a fellow officer — nine MOVE members were given a sentence of 30 to 100 years in prison for third-degree murder.

As of this writing, five of the surviving MOVE 9 remain incarcerated, having been repeatedly denied parole. Two members died in prison. Debbie Africa, the first to be freed, was released on parole in June 2018 after serving 38 years. Four months later, Mike Africa Sr. was released.

The group remained active while the original members were behind bars, however — and their troubles with law enforcement weren’t over. By 1981, those who remained outside prison walls had relocated, and continued to broadcast their views on law enforcement and the state through loudspeakers. Clashes with their new neighbors and with law enforcement ensued. In May 1985, following over a year of surveillance, police obtained arrest warrants for four of the house’s occupants, including Ramona Africa, who as a result went on to serve seven years in prison.

After evacuating the surrounding neighborhood, nearly 500 cops showed up on May 13, to serve warrants and attempt to clear the building using water cannons and tear gas.

A gun battle broke out between authorities and those inside. According to the Philadelphia Inquirer, the fire department blasted the house with 1,000 gallons of water a minute for nearly six hours. Police responded to MOVE’s gunfire by throwing smoke grenades and firing at least 10,000 rounds of ammunition at the house.

Hours later, according to one account, Sambor gave the order that two explosives be dropped above the residential neighborhood from a helicopter onto a fortified structure on the roof of the house.

The explosion ignited several barrels of gasoline that had been stored on the roof, and kickstarted a fire that ultimately consumed the entire block. Sambor reportedly told firefighters on the scene to stand down — to “let the fire burn.” All the while, police continued to pepper the MOVE house with gunfire.

“When we realized that our house was actually on fire, we immediately tried to get our children, our animals, and ourselves out of that blazing inferno,” Ramona Africa recalled in 2017. “But at the point when we were trying to come out, and could be seen…the cops opened fire on us, forcing us back in. We tried several times to get out, but each time we were shot back into the house. This was a clear indication that they didn’t intend for any of us to survive that attack.”

Ramona pulled her young brother, Birdie, out along with her. It wasn’t until she was taken into custody and transferred to a local hospital that she learned that they were the only survivors. The rest of the house’s occupants — six adults and five children — had burned to death.

The city was left reeling. More than 60 homes were destroyed in the fire, and 250 people were left homeless. A cadre of homegrown black radicals had been decimated, their children killed, the sole survivors vilified and, in Ramona Africa’s case, convicted on conspiracy and riot charges.

“MOVE was a pain in the neck for 25 hours a day,” a neighbor whose house had been burned in the fire told *The New York Times* in 1996. “But we didn’t believe the police should have come in here like it was World War III. Those children in that house weren’t criminals.”

In response to calls for answers, Mayor W. Wilson Goode, the city’s first Black mayor, appointed the Philadelphia Special Investigation Commission (also known as the MOVE Commission), which investigated the events and held weeks of televised public hearings. City officials and local residents all took the stand, though the members of the police bomb unit refused to testify, as did Ramona Africa. The result was a highly critical report that found “dropping a bomb on an occupied row house was unconscionable.” Goode later issued an apology, but no criminal charges were filed.

MOVE did eventually see some justice in 1996, when a federal court ordered the city to pay a $1.5 million judgment to Ramona Africa and the relatives of John and Frank Africa, finding that the city had used “excessive force and violated the members’ constitutional protections against unreasonable search and seizure,” according to The New York Times. Ramona was awarded $500,000 total for pain and suffering, as well as the disfigurement and burns she suffered in the fire.

Today, MOVE is still active, and Ramona Africa is still fighting for the freedom of her incarcerated family members. More than thirty years later, the shadow of the bombing itself still hangs heavy over the city of Philadelphia, which is still sometimes referred to as “The City That Bombed Itself.”