13 states in the hottest parts of the country lack universal A/C in their prisons. We explain the consequences.

For more information on these states, see the appendix.

The lack of air conditioning in Southern prisons creates unsafe—even lethal—conditions. Prolonged exposure to extreme heat can cause dehydration and heat stroke, both of which can be fatal. It can also affect people’s kidneys, liver, heart, brain, and lungs, which can lead to renal failure, heart attack, and stroke.

Many people in prison are especially susceptible to heat-related illness, as they have certain health conditions or medications that make them especially vulnerable to the heat. Conditions such as diabetes and obesity can limit people’s ability to regulate their body heat, as can high blood pressure medications and most psychotropic medications (including Zoloft, Lexapro, Prozac, Cymbalta, and more but excluding the benzodiazepines). Old age also increases risk of heat-related illness, and respiratory and cardiovascular illnesses, such as asthma, are exacerbated by heat.

In Texas, a state that has air conditioning in all inmate housing areas in only 30 of its 109 prisons, a high percentage of incarcerated people are particularly vulnerable to heat: 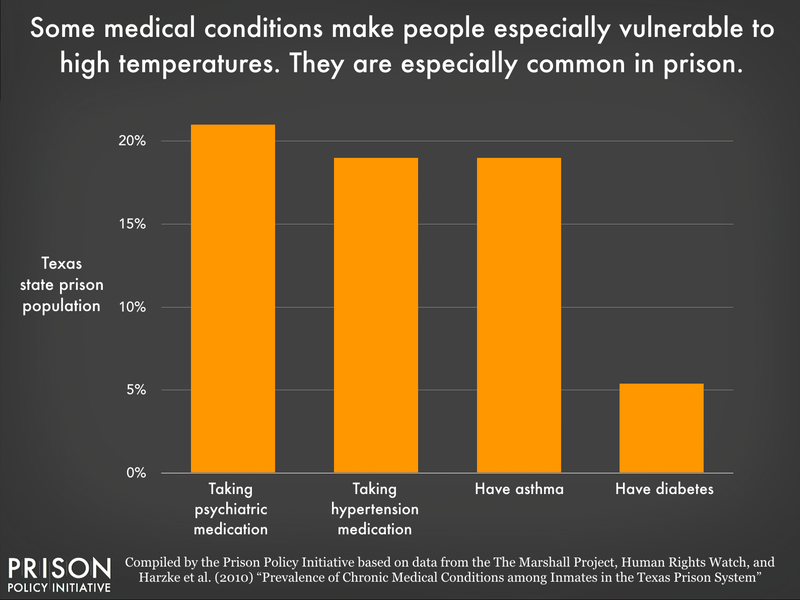 The structure of prisons and prison life can also make incarcerated people more vulnerable to heat. Prisons are mostly built from heat-retaining materials which can increase internal prison temperatures. Because of this, the temperatures inside prisons can often exceed outdoor temperatures. Moreover, people in prison do not have the same cooling options that people on the outside do. As Southern prisons  explains in a 2018 article on prison air conditioning litigation, “people outside of prison who experience extreme heat have options that prisoners often lack – they can take a cool shower, drink cold water, move into the shade or go to a place that is air conditioned. For prisoners, those options are generally unavailable.” Even fans can even be inaccessible. For example, despite the fact that incarcerated people in Texas are not paid for their labor, purchasing a fan from the Texas prison commissary costs an unaffordable $20.

The lack of air conditioning in prisons has already had fatal consequences. In 2011, an exceptionally hot summer in Texas, 10 incarcerated people died from heat-related illnesses during a month-long heat wave. (It’s just not incarcerated people who get sick from the heat in the state’s prisons. In August 2018, 19 prison staff and incarcerated people had to be treated for heat-related illnesses.) As David Fathi, director of the American Civil Liberties Union National Prison Project , explained to The Intercept, “Everyone understands that if you leave a child in a car on a hot day, there’s a serious risk this child could be injured or die. And that’s exactly what we’re doing when we leave prisoners locked in cells when the heat and humidity climb beyond a certain level.”

“It routinely feels as if one’s sitting in a convection oven being slowly cooked alive. There is no respite from the agony that the heat in Texas prisons inflicts.”

Courts in Wisconsin, Arizona, and Mississippi have ruled that incarceration in extremely hot or cold temperatures violates the Eighth Amendment. But these court cases have not had a national impact on air conditioning in prisons. As Alice Speri of The Interceptexplains, “There’s no national standard for temperatures in prisons and jails, and as jurisdiction over prisons is decentralized among states and the federal system, and jurisdiction over jails is even more fragmented among thousands of local authorities across the country, fights over excessive heat in detention can only be waged facility by facility.” As a result, incarcerated people in the South are subjected to unbearable conditions that violate their basic human and constitutional rights. Benny Hernandez, an incarcerated man in Texas, describeshow torturous heat gets in prisons: “It routinely feels as if one’s sitting in a convection oven being slowly cooked alive. There is no respite from the agony that the heat in Texas prisons inflicts.”

With air conditioning nearly universal in the South, air conditioning should not be considered a privilege or amenity, but rather a human right. States and counties that deny air conditioning to incarcerated people should understand that, far from withholding a “luxury,” they are subjecting people to cruel and unusual punishments, and even handing out death sentences.